Â  Â  Â  Â  Â  Â  It had rained the whole night. When we were finally woken up we all rushed inside the church. We walked inside and everyone was overwhelmed with the delicious, cinnamony, belly groaning, aroma of Ana’s 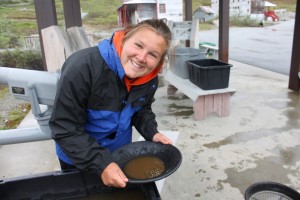 french toast. After breakfast we headed to Hatcher’s Pass for the second time. It was so much different, all the snow had melted and it was a totally different view. It was recommended to me to climb up to the cross. IfÂ you’re wondering what the cross is, it’s just a wooden cross memorial for a women working in the gold mine. I also climbed up into a hidden valley between two mountains where I found a lake. A few people even dipped their heads into the freezing water. The hike back down took less than half the time it took to climb up. Our next stop was at the Wasilla farmers market. Many people bought honey and homemade natural soap. It was really cool but not that big. When it was time to leave everyone climbed into the vans and we headed to the Iditarod headquarters. It had a cool gift shop with keychains, sweatshirts, stickers, etc. Outside it had a little shed and many people were able to hold puppies that were being passed around. Our last stop was back to camp at the palmer church. We were told it was going to rain so we all had to clear out our tents and take them down for the last time.