Â  Â  Â  Â  Â  â€œGuys wake up.â€ I here Katy Traceyâ€™s soft voice say while she taps on our tent at 6:30 in the morning.Â  My tent groaned in response, not wanting to wake up. We had to quickly get ready for our day on the water. The night before we had packed our breakfasts and lunch so we could leave even quicker. All we did that morning was lazily brush our teeth and get changed.Â Â  We had to be in the vans at 7:15 so we could be on the boat at 8:00.Â  Everyone ate a breakfast bar in the van to move even more quickly.

Â  Â  Â  Â  Â  We drove to the spit where we all gathered to walk towards the boat. Everyone was huddled together to keep warm in the windy weather. Everyone had layers of clothes on to keep warm on the boat. The boat was smaller than the one were on our last boat tour, this boat was called Rainbow Connection. The boat had rainbow strips on the side.Â  The boat ride started off with everyone inside the cabin where the crew told us the safety precautions, most of us were trying to stay awake. When they were done talking the fed us some bagels with cream cheese. Everyone then migrated to the bow. We were all crammed in the front but everyone was okay with that because we were all freezing! Eventually over half the participants were not feeling well so they all had to move to the stern and inside the cabin. In the stern you canâ€™t feel the waves, as much so itâ€™s better when youâ€™re feeling seasick. The rest of the people who were feeling fine laid in the bow and talked. We couldnâ€™t go inside because people were getting sick in the cabin. 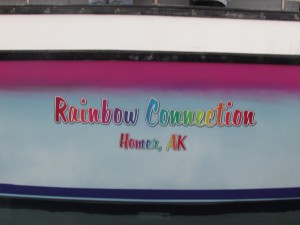 Â  Â  Â  Â  Â  After about three hours into the boat trip everyone made there way in the cabin to eat there packed lunch which contained a sandwich, a granola bar, chips, trail mix, a piece of fruit, and cookies. Most of the people getting sick were sleeping in the cabin or sitting outside in the stern incase they got sick. We all sat inside for a little longer too stay warm, but when the captain announced that there was one humpback up ahead everyone rushed outside. The whale was really cute. We could even see the fluke! Â The second time we saw whales there was a mother and a calf, they were very playful and were slapping their fins. A lot of people got good pictures of the whales before they deeply dove so you could see their fluke. When we were around 40 miles outside of the shore we spotted a storm ahead so we decided to head back. On the way back a couple people fell asleep on the bow. Some of those people were Riley Brownell, Rachel Schoepke, Eden, Jane Turner, Kurt Kraushaar, Blake Ebner, Cam Face, Camden Gardner, and Clare Feneley. Everyone looked so cute cuddled together, Eden had Riley lying next to her and Riley had Kurt lying on top of him. They were all knocked out.

On the way back out we saw really cute otters that were twirling around in the water to keep warm. We also saw a Stellar Sea Lion sitting on top of a rock but when we tried to get close it swam away. We hadnâ€™t seen anything for a few moments so we were called back inside so Conrad could talk to us about Scrim Shaw. We actually got to try it! We carved whatever we wanted on small piece of plexi-glass. I carved a whalesâ€™ fluke. After you carved you put Indian ink on the glass and whipped it off with cardboard. Everyoneâ€™s turned out really nice. After our lesson we were almost back to shore so we just sat and relaxed until we were back to the shore.

We were all really tired so we just hung out at the campground until dinner was ready. For dinner we ate leftovers so we had some chili, salad, and nachos. After that nobody really wanted to do anything because we were all half asleep. We got ready for bed, had hug time then went to sleep.